Eight volunteers from PAWARA, Havant Borough Tree Wardens and The Ramblers joined Groundwork for this morning’s work party.  There was considerably less Himalayan balsam than last year.  We are making an impression on the Potwell and that is much appreciated.  Thank you to everyone who assisted this morning.

We have done such a good job over the last two years that there is not enough Himalayan balsam left in the area to justify another work party and the session scheduled for next Thursday has been cancelled.

If Ian finds some more he will let us know. 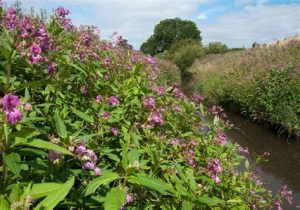 The photo gives an idea of what happens if Himalayan balsam is not controlled.  Although a very attractive plant when in flower, the dense coverage kills off all other plants, reducing habitat for invertebrates and exposing the river banks, making then prone to erosion and increasing sediment into the river.  Pulling it out reduces the impact of the plant and reduces the chances of it spreading by getting into the water course.