A big thank you to the eight volunteers who dug out Spanish bluebells and hybrids this morning.  We filled 19 bags with bluebells, mostly from the small woodland area next to Widley Gardens, and one bag with litter.  This was the first work party at Widley Gardens and we will need several more sessions to clear the remainder.

After this morning’s session there are very few Spanish bluebells left at Sandy Dell. 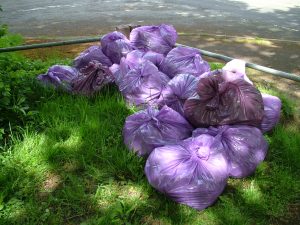 This morning 22 people turned out for a litter pick around Purbrook filling 51 bags and collecting other assorted rubbish including a radiator, half a scooter, road signs and a 5ft long 10” diameter heavy duty plastic pipe!

We were joined by our local MP, Alan Mak, who ‘mucked in’ with everyone else. Special thanks to Tom Mackinnon, who organized the event as part of his Duke of Edinburgh Award Scheme.  Finally a really big ‘thank you’ to the Village Bakery in Purbrook who opened up especially on a Sunday morning to serve a full English breakfast on completion.

61 bags of litter have been collected so far this year and the total since records began in November 2011 is 636 bags.

The photograph shows some of the rubbish collected. 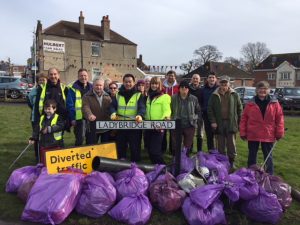 Another productive morning at Sandy Dell

With ten volunteers we were able to tackle several jobs.  We dug out a well-established laurel and several other shrubs, removed some of the ground elder from around the English bluebells we planted and cleared soil from part of the tarmac path which turned out to be a lot wider than it first appeared. 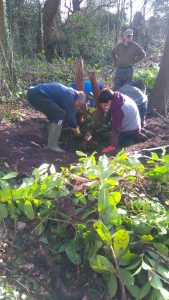 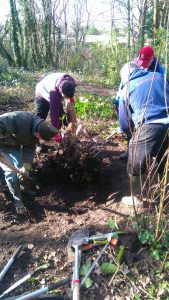 This morning five volunteers collected 20 bags of litter plus other rubbish including a car seat from Purbrook Heath Road and Purbrook village.  84 bags have been collected in 2017 making a total of 575 bags since records began in November 2011. 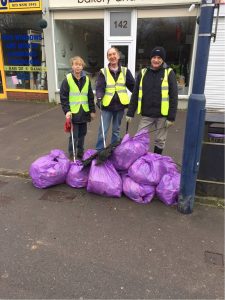 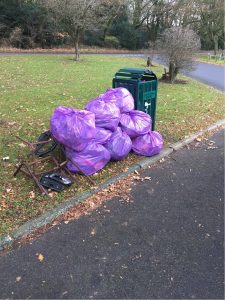 Some action shots from our work clearing overgrowth from the fruiting hedge at Sandy Brow this morning. Thirteen residents joined Nik Knight of Hampshire Bat Group for a bat walk in Johnston’s Coppice on Monday 14th August.  Nik handed out bat detectors and we made our way to the pond where the activity at dusk was mostly common pipistrelle with a pass of a possible serotine.

When we were on the footpath south of Tamarisk Gardens/ Woodsedge, things were more interesting, with a very good recording of a long-eared bat, most likely brown long-eared and a Myotis species bat, probably Natterer’s.  Common pipistrelle was also present.  As we returned to Purbrook Way, a serotine and common pipistrelle were recorded, so there were definitely four species, which is fewer than identified during a survey there two years ago.

It should be noted that bats are protected and a licence is required to handle bats. The PAWARA Environment Group had a stand in Havant Park on Saturday as part of Havant at Home, a free event organised by The Spring Arts and Heritage Centre ‘celebrating Havant Borough and the reasons we all love to call it home!’  The stand also hosted Havant Borough Tree Wardens and Friends of Havant Cemeteries. The event finished earlier than planned due to rain stopping the musical entertainment.  The deteriorating weather meant there was not a high attendance, but the stand and, particularly, the tree identification quiz attracted interest and visitors included the MP for Havant, Alan Mak, and the Mayor of Havant, Elaine Shimbart.  No one identified all twenty trees correctly. This morning’s work at The Bog

Before, during and after photos of the fruiting hedge at The Bog.

Birds had eaten the cherries, there were a few apples on two trees.

Please click on a photo to see a larger image. Photos from this morning. The last of the Spanish bluebells at Sandy Dell

We have now removed all the Spanish bluebells we could see from Sandy Dell, apart from the stubborn bulbs that were too deep, although there appear to be some hybrids left.  There are Spanish bluebells on the other side of the ditch, at Privett Road and plenty of hybrids in the woodland to the side of Widley Gardens, so more to do.  On a brighter note, there was only half a bag of litter and some of that had been there a while.